It’s 16th June: Bloomsday. An appropriate day to embark on a walk, and to walk without an idea of endpoint (or endgame); just to see what happens on the fringes of perception. And as I get the notion, it occurs to me that Joyce would approve if there was a river running through it all.

I consider first following the Water of Leith but decide I need to move further afield to find a more counter-tourist Anna Livia Plurabelle. As has become common, the call of the drift seems to drag me outwards, away from the centre of the city, away from people, to the margins of the urban and the place where the shore meets the sea to the north. The plan then: find an Edinburgh waterway that wends its way to its extinction in the greater pool of memory.

I’ve explored some of the coastline to the northeast of Edinburgh before, but on looking at my map I become intrigued by what lies out to the northwest, beyond the relatively tourist- and runner-clogged Cramond (a place I’ve already visited, in part at least—I feel there is certainly more to come from that location). Since I’ve never ventured west of the shore towards Dalmeny and the coastline above the estate, that settles it. Off we go. 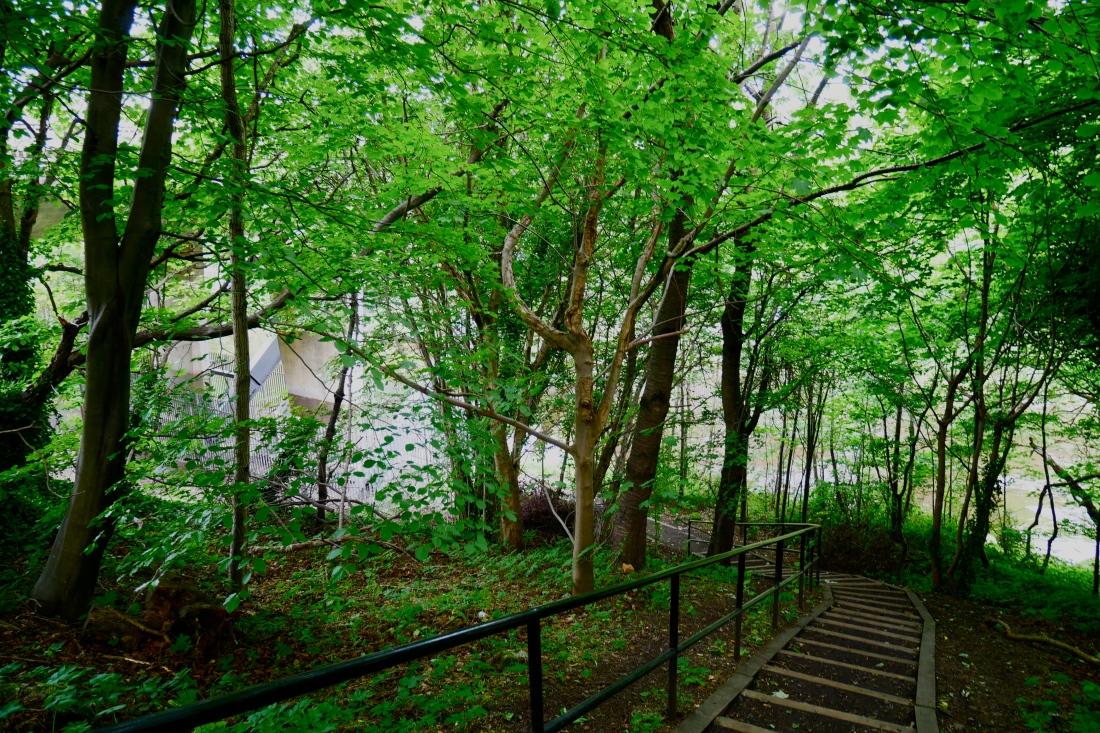 I begin at a location which seems to epitomise a synthesis of the natural and the man-made, a point at the base of the thundering four lane concrete and steel construction that spans the River Almond (Abhainn Amain), carrying traffic along the A90 away from Edinburgh to the Forth Bridge, and on towards Fife and the northeast.

It’s a muggy, overcast morning, the sky hovering in indecision between the threat of rain and a sickly sun scything through the clouds. The great bulk of this oppressive structure does nothing to dispel the sense of the heavens bearing down on me.

Moving out of the bridge’s shadow, I’m struck by the realisation that the Almond, more than any other river, manifests as a twisting lifeline running across the palm of my existence, linking two equal parts of me.

Stretching some 45 kilometres—I’ll turn 45 in a matter of weeks—it rises in Lanarkshire where I lived for the first half of my life and flows through West Lothian, ultimately draining into the Firth of Forth at Cramond. Edinburgh is my adopted home, the place I’ve spent the second half of my life. The Almond acts as a tether, an undulating rope that binds me to the past, my life reflected in its mirror. Today the water is relatively still and only the noise of traffic on the road bridge supplies a backdrop of white noise against which the birds chime and a plane passes overhead with muted roar.

Nearby, close to the east bank of the river, sit the ruins of an old cottage said to be the house of one Jock Howieson. 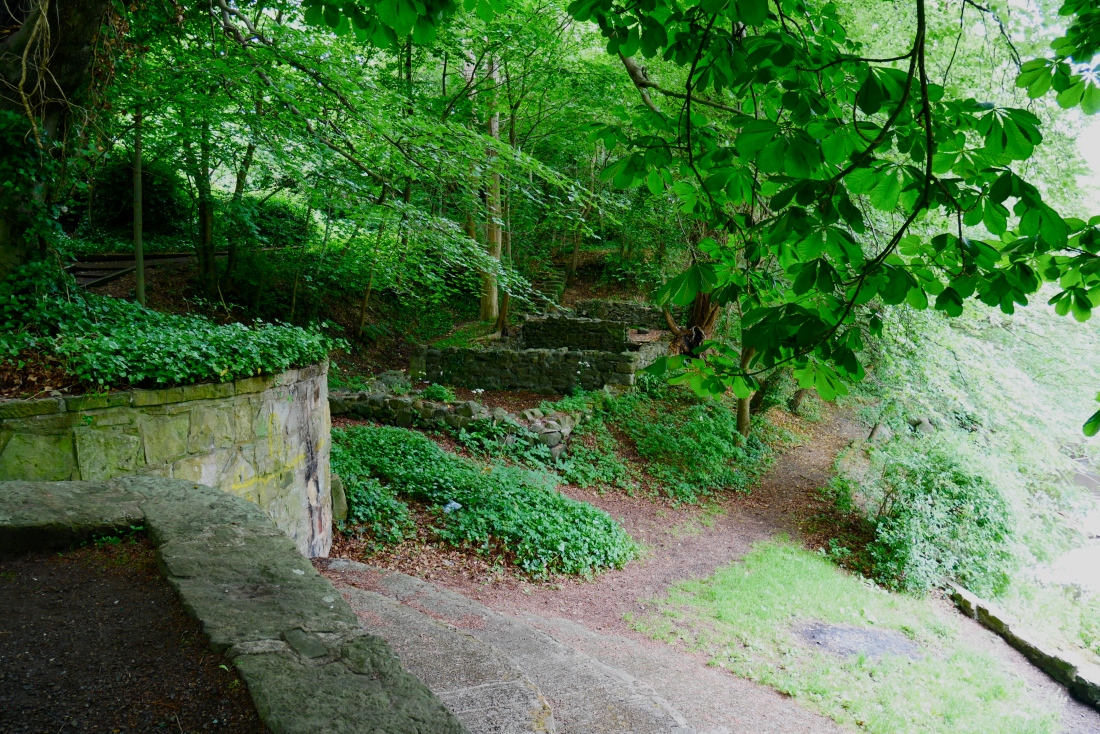 In Tales of a Grandfather, Sir Walter Scott recounts a story of an attack on King James V as he crossed the old Cramond Brig. Howieson, a local tenant farmer, came to his aid and saw off the brigands. In return, the King rewarded him with a gift of the land he worked nearby. As part of this bargain, the King mandated that Howieson and his descendants be prepared to wash the monarch’s hands either at the Palace of Holyrood or whenever they crossed over the water here.

My route is away from the modern cantilevered structure carrying the flow of the A90; I head onto the old bridge.

The Cramond Brig was originally built just before the turn of the sixteenth century and is made up of three wide and imposing arches spanning the Almond, at one time the demarcation between Edinburgh and West Lothian. It was rebuilt and sutured with fresh stone many times up to the mid nineteenth century and the dates of those surgical interventions, and the surgeons, are carved into the fabric of the bridge as a reminder that nothing lasts forever.

Crossing the dark water, I pay a hidden toll and walk on.

Up a hill and down a lane in quick succession, I find myself on the John Muir Way and follow the road north in the direction of the coastline, skirting the edge of the Dalmeny Estate.

The road runs for a mile or so through pristinely-kept, working farmland and a host of mature trees on the estate, its pathway gradually becoming rougher as it descends towards the sea.

Very close to the water, I pause and enter the area of woodland containing Cats Craig.

Hidden amongst the trees, and looking at first blush like a sinister old stone wall, Cats Craig is the outcrop of the thin upper leaf of a teschenite sill. It glowers at me from the shade of the foliage, brooding and quiet for now. In the dappled light of the woods I imagine this sill as that of a window, and feel sobered by thinking on who or what might be peering out at me from the realm of the Other.

Shaking off a shiver even in the cloudy June heat, I realise that the water awaits, and I walk on. 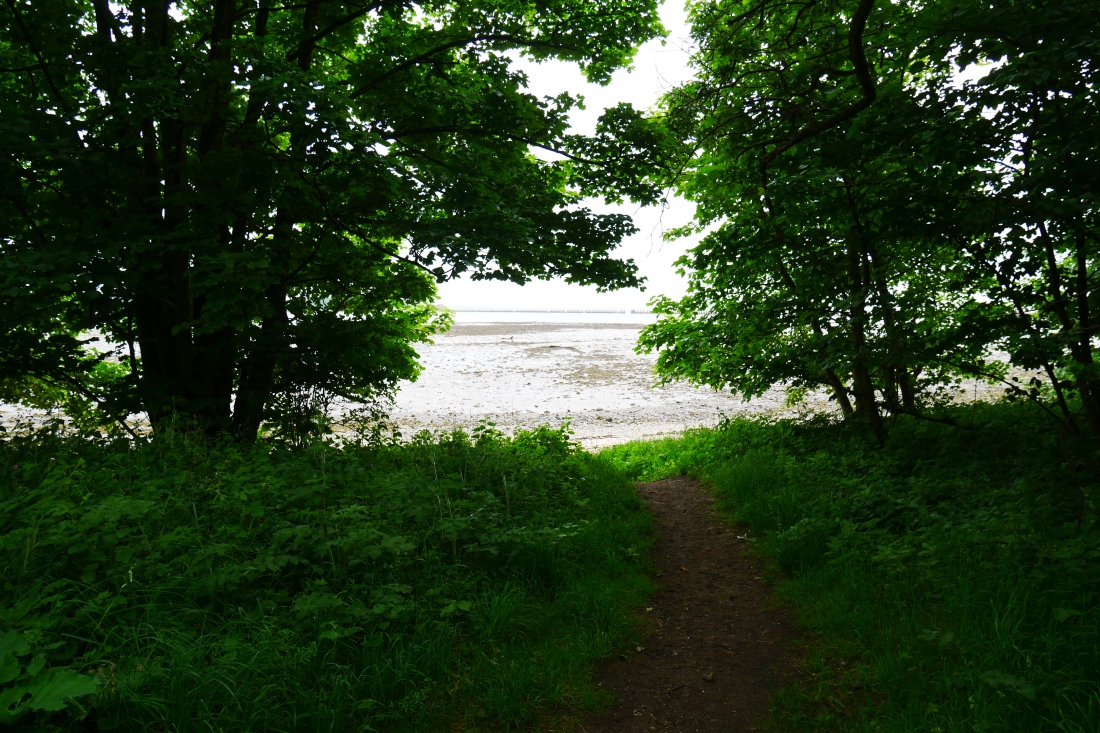 The vista that confronts me as I emerge through the trees is quite something. The Forth shimmers in grey tones, the coast of Fife just visible on its distant shore, intoxicating in subtle shades.  Cramond Island rises in the centre, tethered at the end of its line of wartime defences forming an umbilical to the mainland. In the distance sits the crown on the horizon of Granton gasholder number 1. 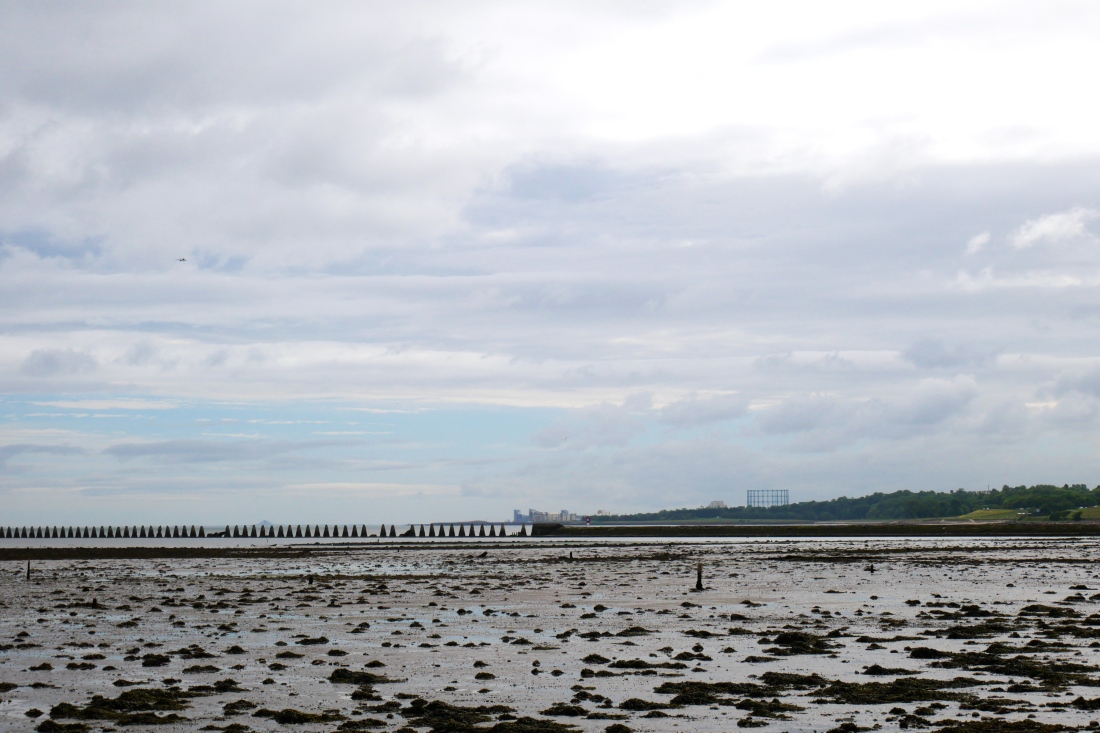 I head west along the deserted beach in the direction of Eagle Rock which has the appearance of having charged quietly out of the trees to judder to a dead stop in the damp sand. 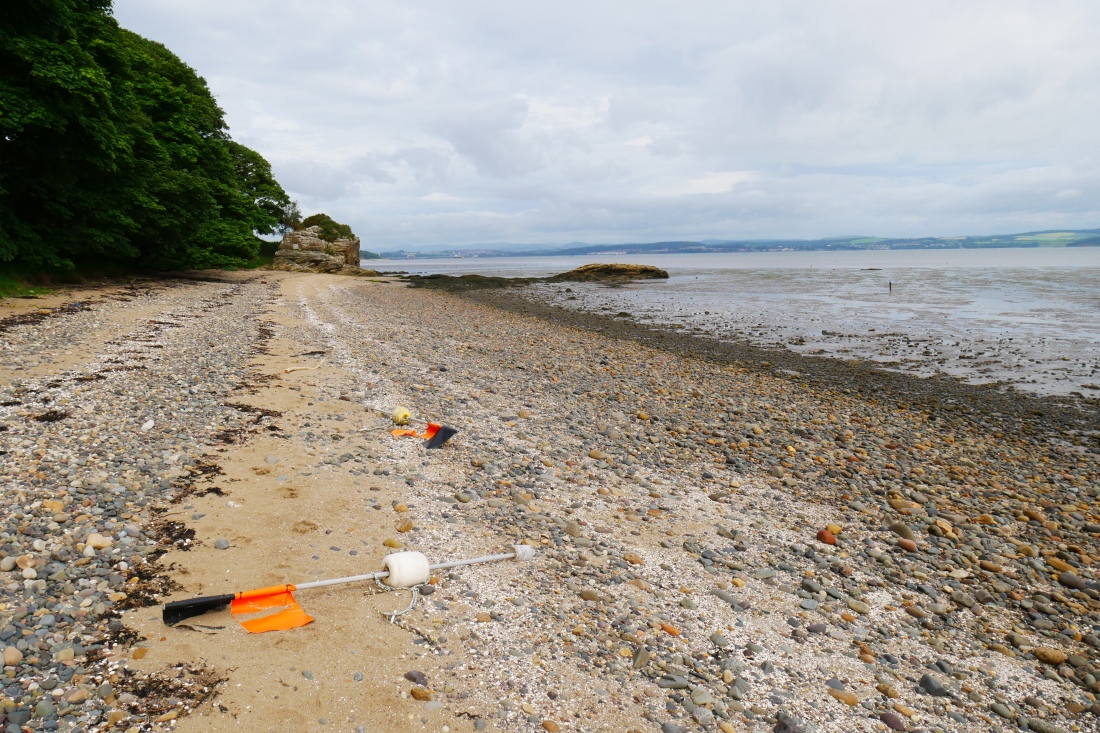 The eastern side of the rock famously displays a carving which gives the feature its title, the more prosaic name being Hunter’s Craig. 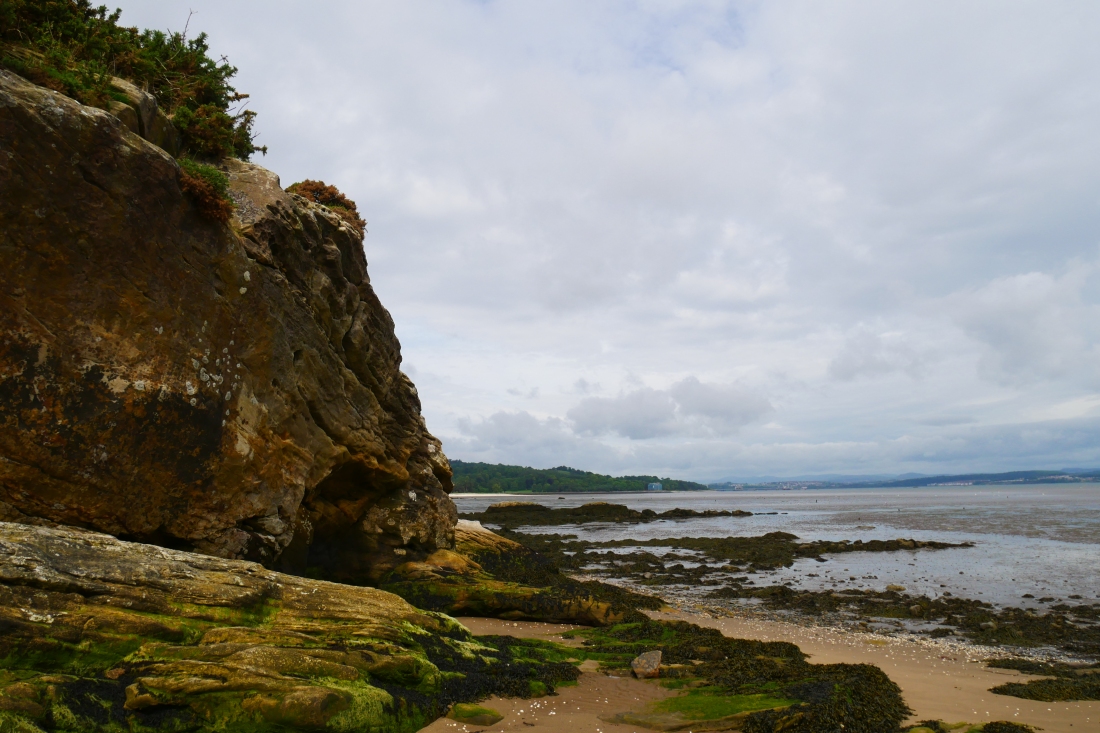 The carving is reputed to date from the Roman occupation of the area, when a fort was constructed at Cramond around AD 140; it remained there until into the third century. The depiction on the rock is crude and long weathered, but this is not a fluke of nature: something has been deliberately carved into a deep niche in the face of the stone.

Does it really portray an eagle? Some say it shows a human figure, perhaps a representation of Mercury, the Roman patron god of, amongst other things, poetry and travellers. It does seem to me to look more like a standing human figure than a raptor. 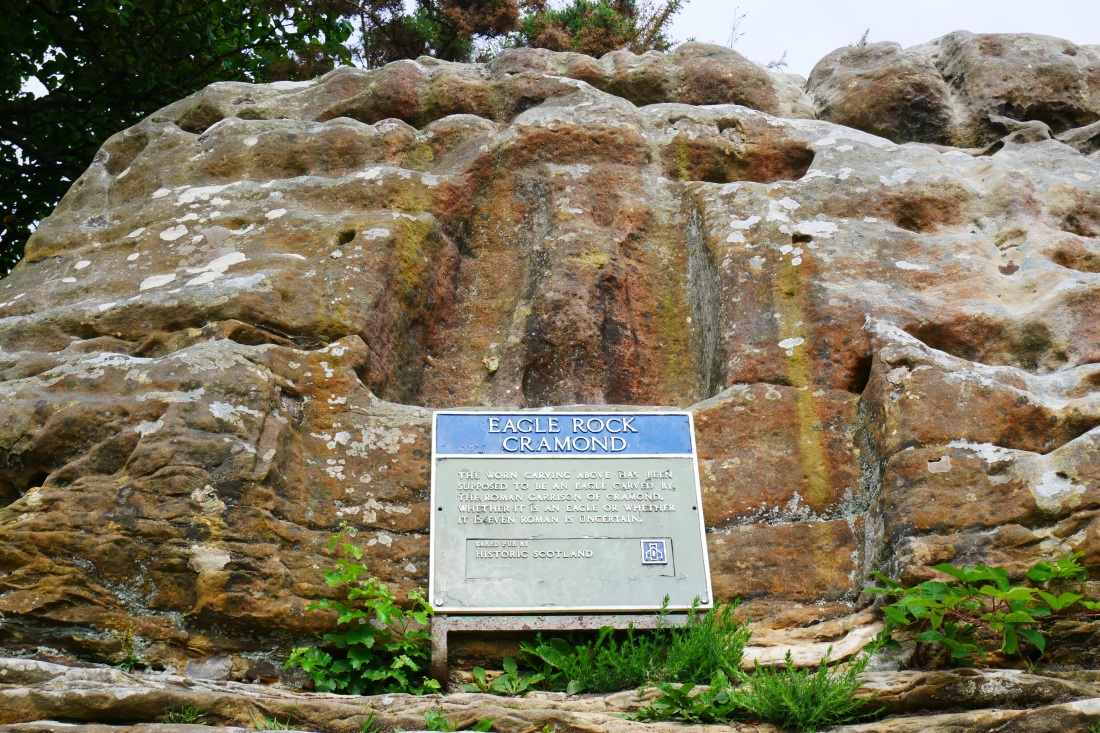 Mercury also happens to be the keeper of boundaries and a guide of souls to the underworld. I haven’t met or even seen another person on this stretch of coastline in the time I’ve been here. Have they all been spirited away by Mercury? Am I being led astray myself, drawn to this boundary between land and sea by the music of a mythic lyre made of shell?

The god’s role as a custodian of boundaries is apt. I’ve realised it’s the margins which intrigue me more than other locations, those parts at the edges of the world most at risk of fraying and tearing. Places where the light or the dark leaks in, where conventional modes of transport inevitably falter and fail. It’s no surprise then that an unusually large proportion of my flights of fancy relates to the chthonic.

The surface of the stone on Eagle Rock is warm on my palm as I touch it, that hulking tape-recorder of memory. A stream runs into the water nearby. More Lethbridge; always Lethbridge.

I climb onto the summit via a narrow gorse-gripped path at the rear, and wonder, as I stare out—to the water, to the wading birds, to Cramond Island, to Fife—just what the Roman soldiers garrisoned near here saw and what they thought of it all as they stood atop the rock.

Did they make offerings to Mercury to lead them home, wherever home was, from this remote point at the edge of empire? Or, homesick and beset by weather they’d rather leave behind, did they pray for a portal to the underworld to open beneath them, clothe them in the rheumy drift of Hypnos and banish the dark, dank days forever?

I speculate that the carving in the rock is a marker for some entity imprisoned in the giant stone box. Perhaps it’s a seal, a lock on what’s contained within; a warning. The figure is weathered and vandalised. What will happen when it’s gone completely? Will some thing—some rough beast—be set free again after two thousand years?

I move on around Eagle Rock towards the west, picking my feet carefully across squelching sandpools and copious swathes of bladderwrack. The coastline stretches on and on.

Following the swerve of shore, I find the next cove filled with shells—if there are any spectres here, waiting to surprise me, my feet crunching on the iridescence will quickly have alerted them to my presence.

Something signals a warning, nonetheless.  An opening to a gateway?

And ahead, just on the bend of bay, rising out of the beach, is an unusual looking cuboid stone. It  resembles nothing more or less than a small altar. This seems to happen to me a lot. Introibo ad altare Dei. 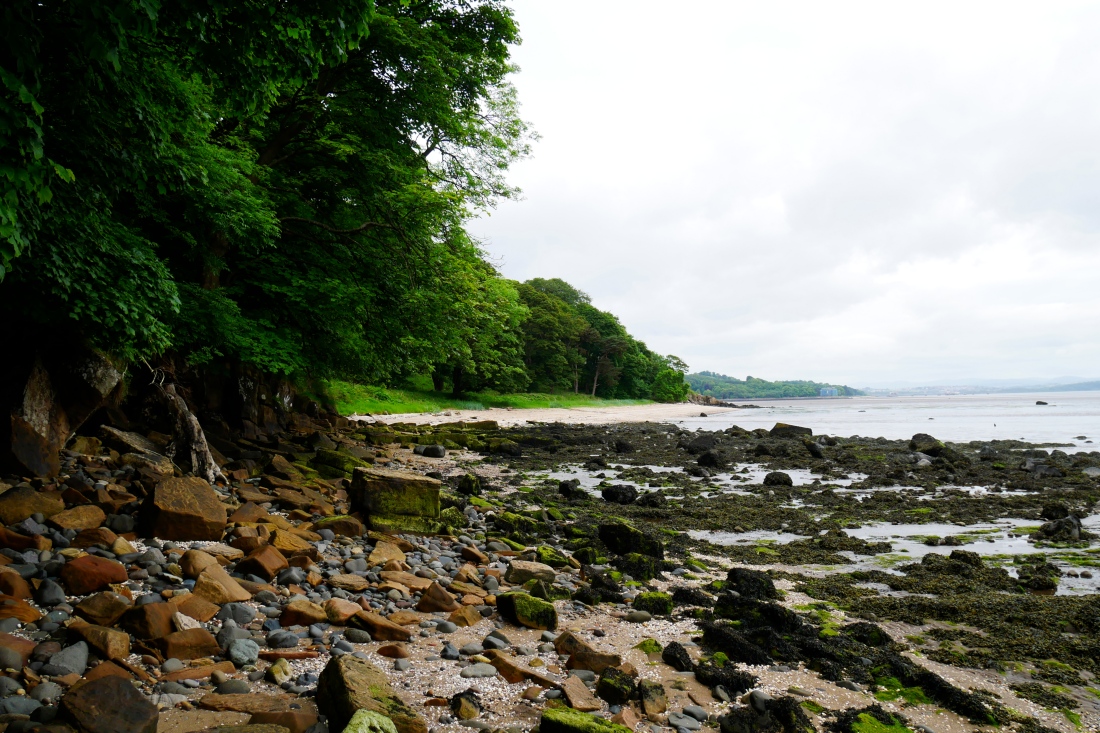 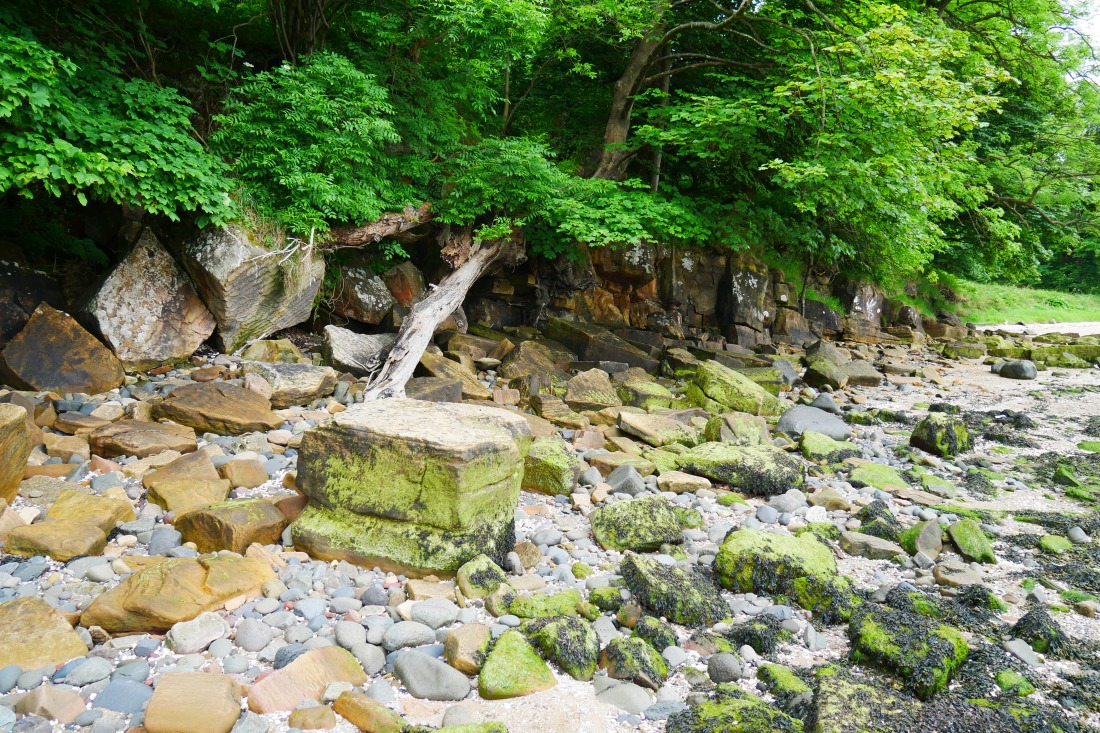 It feels appropriate to mark the presence of this curious platform somehow and, although there’s no human audience in attendance, I perform my own humble rite of improvisation on the altar with two strange-looking long stones I find lying on this beach; when it’s finished, I leave them there for someone else to continue the work. Or just to discard them—that, too, would be a suitable coda. 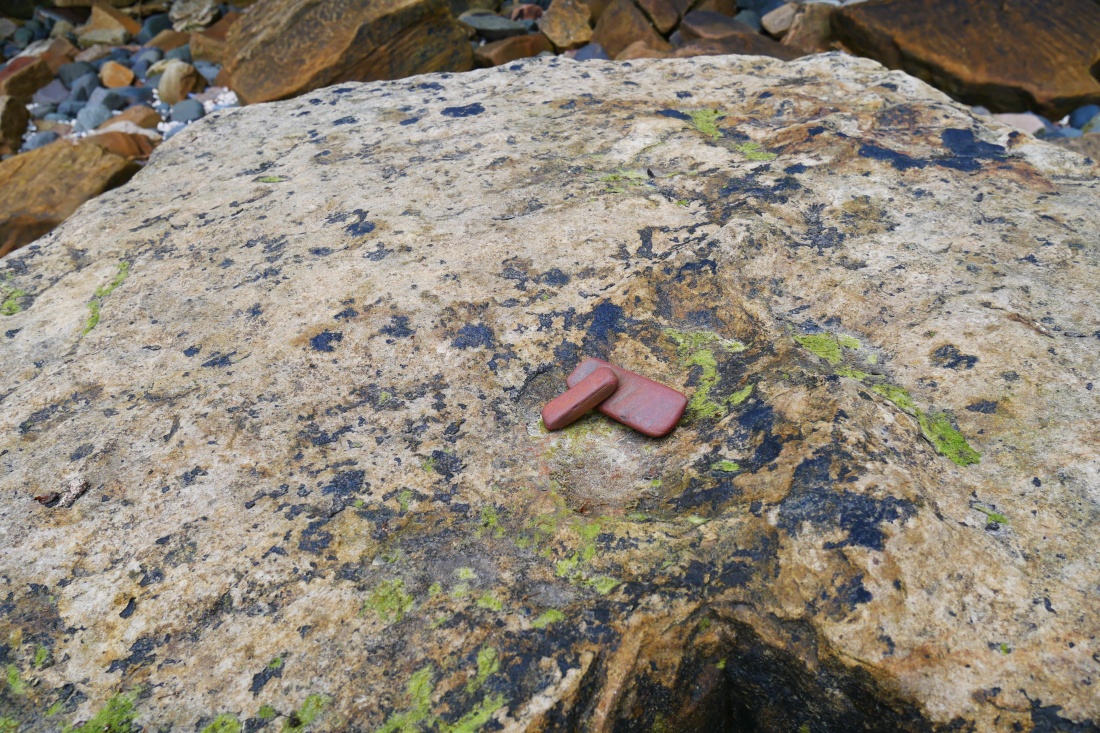 Perhaps I’m not the first to have done this, to have come to this spot and played quiet musics for an audience of gulls and cormorants, accompanied only by the lapping of the waves. Others have certainly made their own marks here over time. 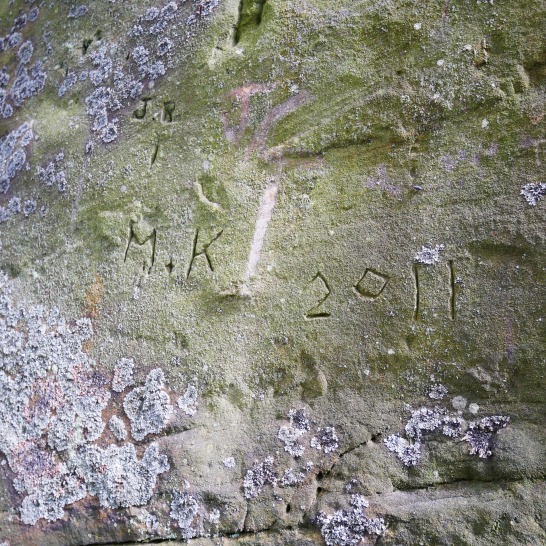 This beach has its unwelcome, modern paraphernalia, for sure…

…but it also boasts its secrets and a hidden beauty beyond the notion of holiday skylines and estuary cruises. The minutiae of the immediate and that which I never quite caught from the corner of an eye: a straggler from Mercury’s otherworld. 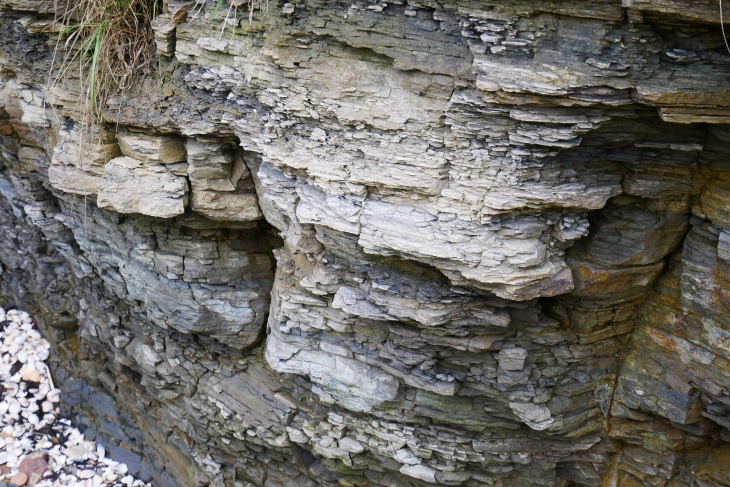 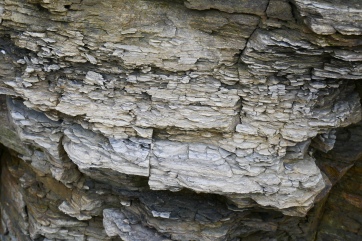 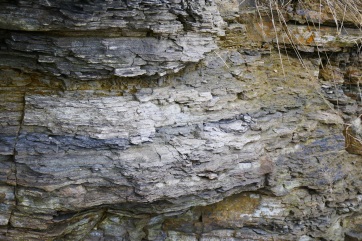