To his good friends thus wide I’ll ope my arms;
And like the kind life-rendering pelican,
Repast them with my blood.
Shakespeare, Hamlet, IV.5

The way upward and downward are one and the same.
Heraclitus of Ephesus 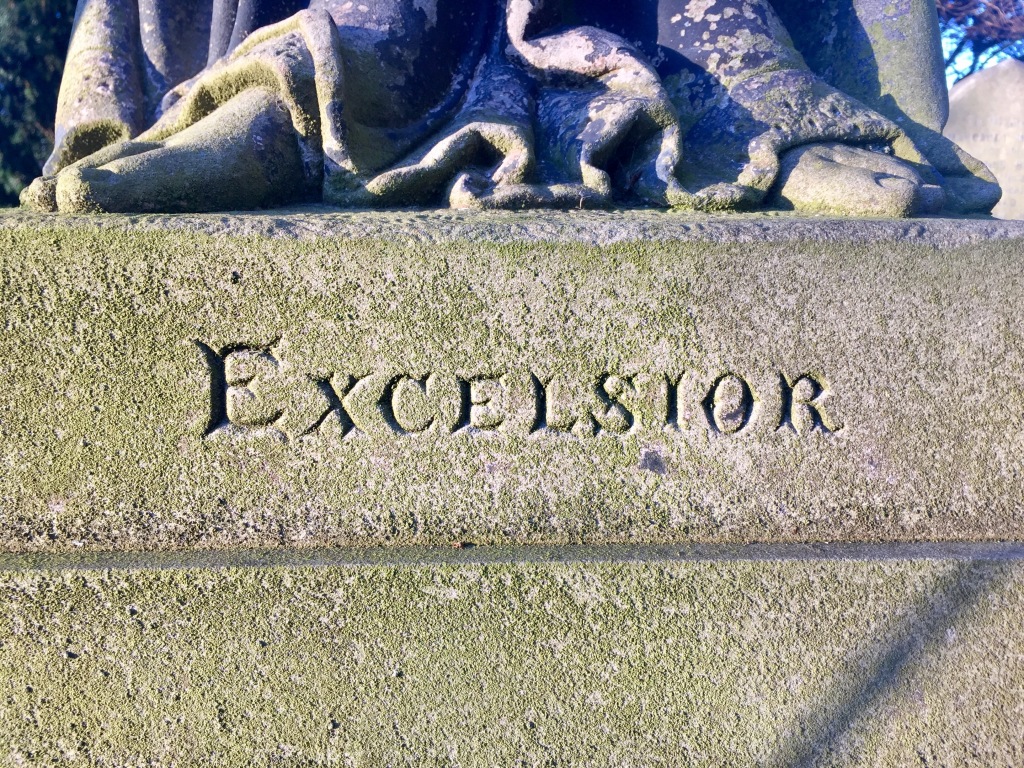 Excelsior: the word is inscribed on a plinth marking the grave of one of the many illustrious residents of the Dean Cemetery. I wandered in that place on a cold afternoon burnished with the most remarkable Winter sunlight, my feet cracking on the frostbitten paths as though crunching on boneways sintered from the marrow of innumerable torchbearers of the Scottish Enlightenment.

Fraxinus excelsior, the ash tree, the Dreamin’ Tree, offspring of Yggdrasil. There are some of them here, and they tap curiously against the gravestones, their trunks hollowed out and brimful of fearsome arachnids and worse. Or so my imagination teases me, in this city of the dead devoid of any other visitors.

Excelsior. Ever upward, and onward. Or downward. Into the loam, into the worms and the darkness, into memory and imagination. As above, so below; and death the kraken waits to drown us in the sea of earth.

Opened in 1846, the cemetery’s official site records that it established itself as the most sought after burial place in Edinburgh and one of its most secure—safe, no doubt, from those who would seek to prise apart the soil’s suffocating grip, for whatever Resurrectionist or grave-robbing purpose. The reputation of those laid to their eternal rest here certainly vouches for the cemetery’s fashionability: the list of interments is impressive, at least in the context of 19th Century Edinburgh. 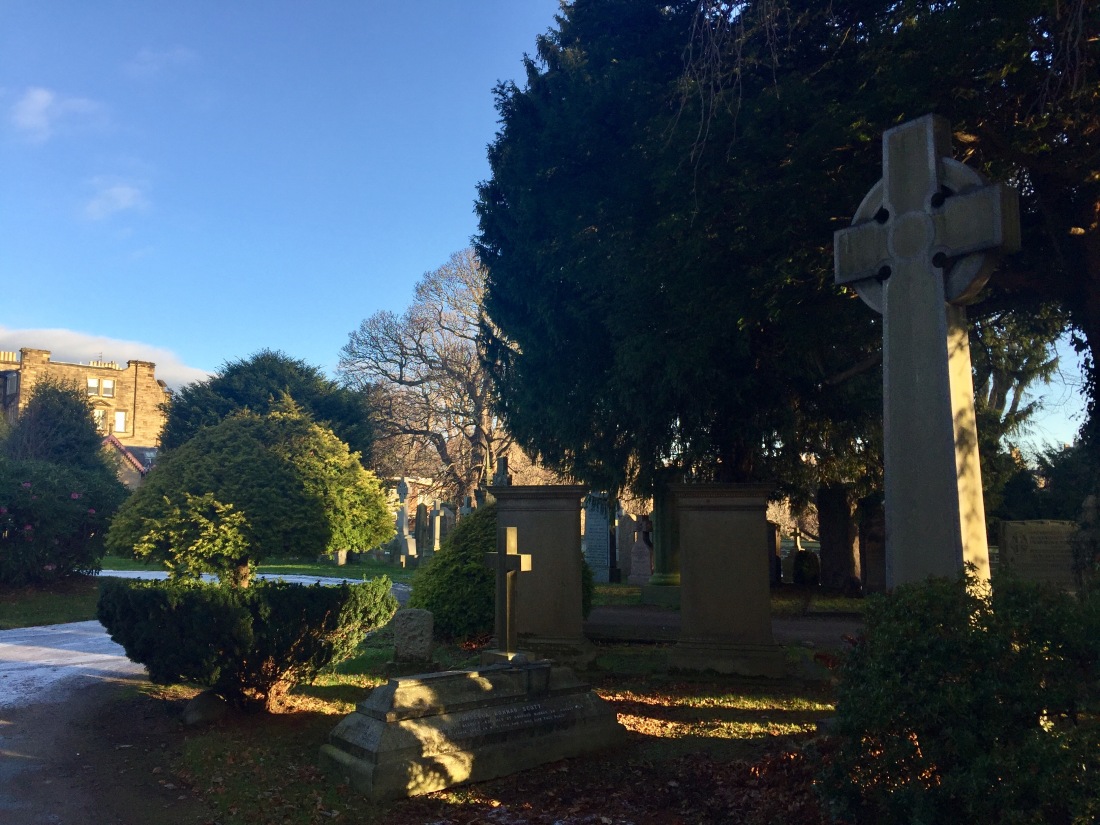 Alongside physicians, lawyers—including many judges and prominent advocates of the day—politicians and the Edinburgh gentlefolk and cognoscenti (the western wall of the cemetery is designated Lords’ Row), I encounter some other, more curious burials.

Here is Lt. John Irving of HMS Terror, one of the ships which set out on the doomed Franklin Expedition to find the Northwest Passage. Lost out there, his body is said to have been discovered some 30 years later and brought back to Edinburgh to rest in the cemetery.

The circumstances surrounding the recovery operation are worthy of note. Frederick Schwatka, leader of the expedition to discover what befell those on the Franklin Expedition, found what he thought was the grave of Irving on King William Island. But this burial site was a little different, constructed as a ring of stones and more elaborate than other graves already found by those in the search party.

The body was only connected to Irving because of a single, somewhat tenuous reason: a commemorative medal, awarded for the seaman’s acumen in mathematics, was found near the grave and the remains automatically assumed to be his. One academic suggests the body may not have been that of Irving at all.

The monument, which bears a striking frieze of the ships and men involved in the search for the Northwest Passage, is an ugly, incongruous Celtic cross. It rises skyward, perched atop a jumbled mound of rough rocks with a temporary look about it, its rockery of a plinth quite out of keeping next to to the expensively designed lines and cut stone of other grave markers here.

And who can tell? Perhaps the superstitious masons of the time—unconvinced that Lt. Irving truly rested beneath the pathway here—felt he might somehow make his way back to Edinburgh, at a moment when the rain, borne in from the sea, smashes against the walls of the cemetery and the waves on the Forth are at their fiercest. The revenant would need a point of easy ingress, through the tumbledown rocks, to take his place beneath the cross. A fanciful suggestion, I’m sure. And the present recumbent, what of him then, cast out after decades of sleep and forced to roam the pathways of the cemetery, skeletal feet rapping and tapping on paths that snake through the yews and ash trees? Will he cast off his grave pall, hastily throwing it over another headstone here? Will he in turn seek out Schwatka’s shade to call him to answer?

Scattered among the great and the good here are also the Scottish Colourists, Samuel Bough, Francis Cadell and JD Ferguson, as is one of photography’s first exponents, David Octavius Hill. Much has been written about all of them. 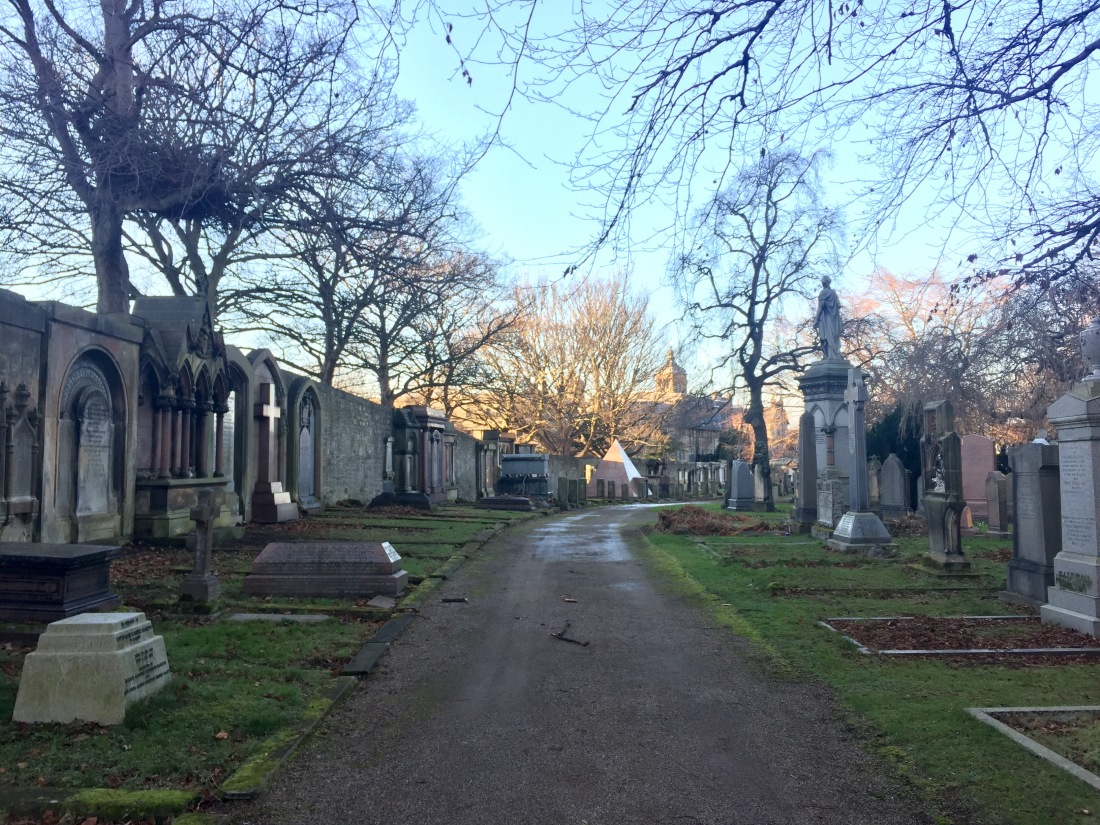 But it’s this grandiose, esoteric wonder which catches my wandering gaze. In an otherwise Christian cemetery, it can’t help but stand out—and stand up.

The monument marks the resting place of one John Leishman (a Writer to the Signet who died in 1861) and its upper section is a soaring pillar encircled by a spiral of stony ivy, the top surmounted by a sizeable crucible. I close my eyes and see this granite bowl, as night falls, burning with a fragrant oil, its smoke rising upward beyond the reach of the trees and seeping little by little into the dreams of the living in the surrounding city.

Below, on an ornate pedestal, three pelicans keep vigil above a trinity of all-seeing winged lions, staring out across the angles of the graveyard. The Pelican, a Christian symbol of atonement and of the Redeemer, was believed to pierce its own breast to feed its young with its blood. And the lions could be intended to represent the evangelist St. Mark (why three of them? an odd symmetry), but what if they signify a Babylonian lion from the apocalyptic Book of Daniel? An avatar of all that is pagan in this God-fearing city. What then?

The first was like a lion, and had eagle’s wings. I watched till its wings were plucked off; and it was lifted up from the earth and made to stand on two feet like a man, and a man’s heart was given to it. (Daniel, 7:4).

I am about to leave the place, by a door that leads to the back of the Dean Gallery, when I see it. In startling pink Peterhead granite, a pyramid pierces the ground against the western wall of the cemetery.

The gloss on its polished stone facing gives it an air of being a recent addition (or more likely a recent arrival from another dimension), but the pyramid has, I learn, rested on this spot for more than 150 years. The inscription on the bronze plaque, the oxidised letters aching with a sadness quite out of keeping with the outré and yet austere presentation of the structure, reads:

[‘Andrew Rutherfurd, surviving against his will, placed this tomb in mourning to his most beloved wife, and to himself, 1852‘.]

Rutherfurd was born in Edinburgh in 1791, the son of a Church of Scotland minister in the High Kirk who it’s said was acquainted with Robert Burns. (This is Burns Night, of course). He was well educated, first at the Royal High School and then Edinburgh University, and was called to the bar, eventually being appointed as Solicitor General and latterly Lord Advocate. In 1851, the year before his wife’s death, he was installed as a Senator of the College of Justice, that is, a judge in both the Court of Session and the High Court of Justiciary. He survived only one more year after this (contra votum superstes!) and is also buried in or under the pyramid.

The tomb was devised, doubtless at great expense to Rutherfurd, by the noted architect William Playfair, another pillar of the Scottish establishment. Who else could suffice to be designer of the final resting place of one of the city’s most prominent families?

But the outlandish monument is primarily a memorial to Sophia Rutherfurd. That et sibi—’and to himself’—feels like an afterthought. And as memorials go, in a picture perfect Victorian cemetery, it’s really something. Not for her a Christian cross in traditional stone, as one might expect of the wife of one of 19th Century Edinburgh’s most honoured establishment figures and the daughter-in-law of a man who became Moderator of the General Assembly of the Church of Scotland; instead, Sophia—even her name evokes distant lands far from the staid and ordered streets of Playfair’s New Town—lies within a tomb fit for a pagan queen or an empress.
Perhaps this was Rutherfurd’s intention, a final attestation of his adoration for Sophia, elevating her to the realms of goddess-hood. Surviving against his wishes: did Rutherfurd think he could bring Sophia back? Toby Wilkinson, in his Before The Pyramids (2004), posits a suggestion that the function of the (Egyptian) Step pyramid was ‘that it was a resurrection machine designed to propel its royal owner, Horus, to the pre-eminent place among the undying stars.’ 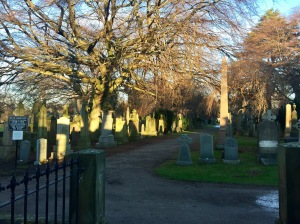 But Andrew Rutherfurd was not really a Rutherfurd at all. His father was the Reverend William Greenfield, another pillar of the community—that is, until 1784, only two years after he became Moderator of the General Assembly. For in that year, it was discovered he had been ‘indulging in unnatural lusts’ with university students who were lodging in the manse. Despite, or more likely because of, his prominent place in Edinburgh society, the scandal was covered up and Greenfield effectively driven out of the city, forced to live in the north of England under the surname of his wife: Rutherfurd. His son’s lofty place in Victorian society—and that of his wife—is testament to the ebbing of memory in a less probing and cynical age. In this time of information excess, I feel a sadness creep upon me that his father’s shame casts as long a shadow now as the bereft Rutherfurd’s love for his wife.

The sun is beginning to set now and I should think about leaving this place of shades and neutral tones, where I like to think that not everything is what it seems. Even those who guard the graves become weary with the weight of the years, as the shadows lengthen on the ground. 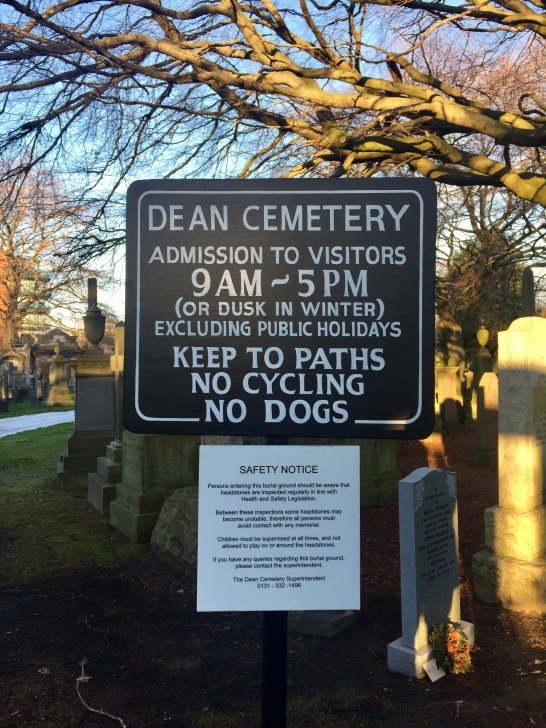 It’s Winter, and dusk is here, at the door. It’s time to make my escape and so I wind my way past the Rutherfurd pyramid and out into the area behind what was the Dean Gallery. It’s now known as Modern Two, but I can’t quite make that bland name stick in my memory.

The always challenging work of Scottish revolutionary garden poet Ian Hamilton Finlay adorns the wall of the car park: hidden, unassuming, a surprise for the passerby. The world has indeed been empty since the Romans, but the cemetery is full.

And further along the path, as though to underline or even undermine my dérive into the very soil of the nearby cemetery, I come upon Eduardo Paolozzi’s magnificent, Blakean bronze, Master of the Universe (1989).

A Newton with the eyes of Michelangelo’s David, he points down into the earth with his right hand. Beneath the fingers of his left hand, as though in mockery of Andrew Rutherfurd and his failed resurrection machine, stands a diminutive pyramid in two lifeless dimensions.

4 thoughts on “Dean Cemetery: the way upward and the way downward”